PAHs cause headaches for both regulators and the regulated. The headaches are rooted, in part, in history, so this post is a brief introduction to the history of PAHs in the environment, with an example of a regulatory headache exacerbated by government scientists who misrepresented historical data.

Generally speaking, no one makes PAHs on purpose – they are just part of the raw materials and byproducts of modern life. In addition to being present in oil and coal, PAHs are made in wood-burning fireplaces and stoves, in engine lubricants, in compost heaps, in decaying plants in a swamp… wherever organic matter is heated. Thus, humans are now and have, since fire was tamed, been exposed to PAHs. As one researcher put it:

Polycyclic aromatic hydrocarbons (PAHs) are found in our environment. The major route of human exposure for nonsmokers is however via food. PAHs in food originate from environmental deposits or arise from food processing. Food processing techniques contributing to increased PAH concentrations include smoking, drying, roasting and barbecuing. (Duedahl-Oleson, 2013)

From the late 19th century through the 1960s, PAHs in the environment increased with the increased use of fossil fuels. As industrial and vehicle emission controls were adopted around the world, PAHs in the environment generally decreased from the mid-1970s through the 1990s. Then, in the late 1990s, PAH levels began to creep up again in some locations. The reasons for the latest increases are thought to be related to the rapid increase in industrialization and vehicles in East Asia. The graphs below are from some studies of PAHs in dated sediment cores.

The first is a graph of benzo(a)pyrene (BaP) in a sediment core from the Pettaquamscutt River in Rhode Island, USA. Except when separated in a laboratory, the PAH compound BaP never occurs by itself. There are hundreds (maybe more) of PAHs, and individual compounds are not isolated in nature – they always occur as part of a mixture of PAH compounds. For this first graph, Lima et al. (2003) analyzed isolated BaP. Increased concentration from about 1880 to the 1960-70s is clear, with a drop off, the authors speculate, possibly reflecting the Depression and another possibly reflecting the 1973 oil embargo. Concentrations began to drop again during the 1980s, as emissions controls took hold. Then the values began to rise again in the 1990s. 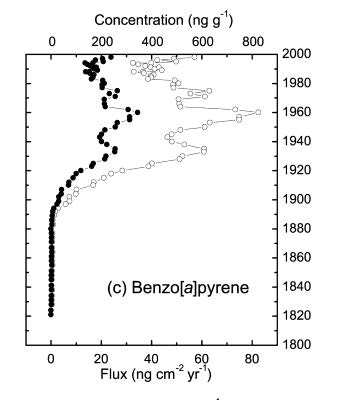 The next graph is from a sediment core collected in Central Park Lake in New York City. Louchouarn et al. (2007) show both soot black carbon (“GBC”) and “total” (“SigPAH”) PAHs. Total PAHs in this case is an analysis of 16 individual PAHs following a USEPA method.

The authors of the paper explain the peaks as follows:

The highest levels of total PAHs correspond to peak coal use for space heating in NYC in the early 1900s. In contrast, GBC concentrations were highest in the mid 1900s, a period when oil combustion dominated local fossil fuel use and incineration of municipal solid waste (MSW) was common practice in NYC. Decreases in GBC levels observed in more recently deposited sediments are consistent with improvements in
particle emissions control systems. (Louchouarn et al., 2007)

The third graph is from Gabrielli et al. (2010), and shows total PAHs (the same 16 compounds as above) analyzed in snow-ice cores collected from Colle Gnifetti, Monte Rosa massif, in the High Swiss/Italian Alps. The top graph (red) shows results for all 16 PAH compounds added together, and the bottom (blue) just for the heaviest 6 compounds. 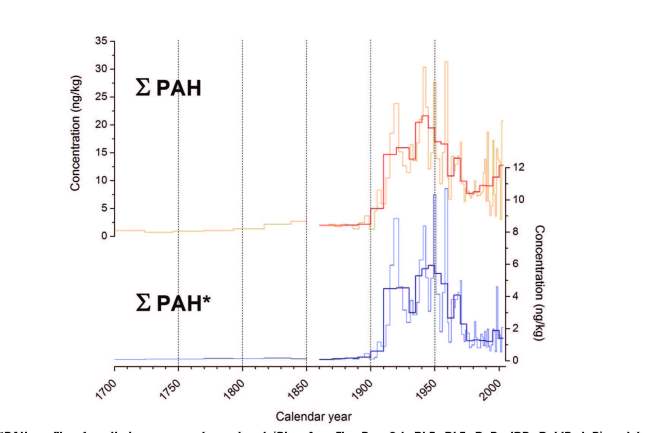 Even in this relatively remote location, the concentration over time is broadly similar to the pattern in Rhode Island and the heart of New York City. Concentrations begin to increase in the late 19th century, reaching a maxima in the 1960s- early 70s, declining into the 1990s, then climbing again.

But, PAH concentrations did not decline in the 1980s and 90s everywhere, as shown in the graph below. The data are from sediment cores collected from Lady Bird Lake (formerly called Town Lake; Van Metre and Mahler, 2014), which was constructed as a cooling pond for a fossil-fuel fired power plant in downtown Austin, Texas. PAH concentrations dramatically increased from 1960 when the power plant began operations through the mid- to late-1990s. After a history of fires and spills, in 1995 the City of Austin (the owner of the municipally operated facility) began to incorporate more controls (McKnight, 2012).

This graph illustrates hyper-local effects. It also illustrates a problem faced by public officials and regulators, who are usually not equipped financially or otherwise to evaluate science. The authors of the paper (Van Metre and Mahler) completely left out the history of the power plant, ignoring the coincidence of the increase and decline in PAH concentrations and power plant operations. These two government-employed scientists were instead the point-of-spear advocates for urging local bans of a pavement product, which they falsely identified as the reason PAH concentration increased. Based on their advocacy research, the City of Austin had banned the product shortly before the power plant closed for good. Triumphantly, Van Metre and Mahler pulled the wool over the eyes of both local politicians and peer reviewers (how were they to know about the power plant when the authors did not even mention it?), proclaiming that the ban that they made happen had worked. This is one face of the unaccountable bureaucracy.